I have to admit, I had no idea I would love my Instapot this much! It had been so hyped up. I already had a pressure cooker I rarely use. But when DH offered to buy it for me on a whim when it was on sale at Amazon, I decided to give it a try. I’m glad I did!

Unlike my stovetop pressure cooker, this one keeps track of time for you when it comes to pressure so you’re not waiting around the stove ready to start the timer.

I found this recipe for Moroccan stew in Clean Eating, and when I saw the 4-6 hour slow cooker time I knew I’d try it in the Instapot. I am gone 8-9 hours for work, so unless I made it on a weekend, 4-6 hours just wouldn’t work.

Check out the recipe below. Here’s how I adapted it for the Instapot. Note that I used canned chickpeas, but you could very easily make them in your Instapot up to a few days ahead of time. 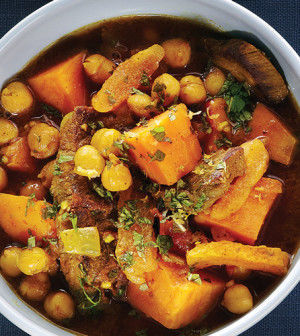 The verdict: This was SUPER delicious! I love the flavors. And with the Instapot it went together super fast. Perhaps an hour and a half including prep time.